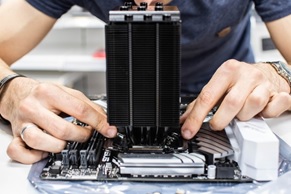 PCs are used for a litany of things, from surfing the web to processing word documents to using them as a means to mine cryptocurrency. Many people will also use them to engage in entertainment such as online gambling, which is an industry that has seen exponential growth, most likely due to the convenient way of accessing the platform. More examples of these kinds of sites can be accessed by people looking to play games online, but before they go out to purchase a desktop, they should consider if it may make more sense to purchase the parts separately and build it themselves.

The notion of building a computer alone is enough to put anyone off the idea altogether. This is because most people think that dealing with small, fragile electrical components like what can be found in a computer is just asking for frustration to ensue. While those who are not armed with the right knowledge may easily become frustrated with the process, this does not always have to be the case. It may surprise some to learn that building a computer is an easier experience than most think, and it will almost always work out to be cheaper than prebuilt computers.

Companies who sell prebuilt computers do so because they know that most people do not have the time or are not confident enough to build the desktop themselves, which is why they can charge a hefty premium on them. Those who are in the market for a computer should always remember that buying the parts separately will generally always be cheaper than buying a prebuilt computer, though the current state of the GPU market at the moment throws a spanner in this claim.

Those who have been following the GPU situation will be aware that the components are currently inflated in value, especially when it comes to the newest line of cards. This makes purchasing them separately problematic and we are currently living in a rare scenario where buying prebuilt might actually be cheaper than building the PC from scratch. However, when the situation returns to normal by supply catching up with demand, then the idea of building a PC being cheaper will become commonplace once again.

Getting a better deal on a PC of the same performance is not the only reason why many should build their own PC instead of buying one that has already been made for them. The sense of satisfaction that occurs when first-time builders press the power button and everything lights up is hard to put into words and can only really be experienced. It is akin to finally putting that last jigsaw piece into place, completing the puzzle to reward hours of work.

Although people may be aware of the benefits of building a PC themselves, they may still worry about how exactly they can go about doing it. Fortunately, a great range of information exists online, including informational and easy to follow videos on YouTube. All parts will also generally come with instructions on how to fit them into the computer case. Taking this into account, there is virtually no reason why everyone should not build their own computers.

What is EV Frenzy?

A Look Into A few of the Hi-tech Gadgets

How to locate a Reliable Pc Repair Tech